Occupancy-based lighting is driving energy efficiencies today, besides drastically improving convenience.Wired or wireless, it plays a key role in achieving cost effectiveness, especially, in locations that are intermittently used like stairwells, breakrooms, conference rooms, restrooms, etc. Additionally, with the rise of telecommuting, offices today are increasingly becoming intermittent paving path for more occupancy sensing technology-penetration. Similarly, classrooms, laboratories, warehouses, parking garages, and parking lots are all locations that stand to benefit from occupancy-based lighting. Occupancy lighting functions with the help of motion sensors that detect occupancy status or vacancy status of a location. Based on sensing capability, they are classified mainly into two; occupancy sensors and vacancy sensors.

Occupancy sensor are designed to detect people presence when they enter or leave a space. When a motion is detected, the sensors send signals to the control unit which processes these signals to increase or decrease power supply to light fixtures. Thereby, based on the presence, occupancy sensors automate switching ON/OFF of lights. These sensor-driven lighting systems can immensely save energy in commercial applications that deal with larger areas and people.

Among the various types, passive infrared (IR) sensors are commonly used that sense heat to send electrical signals, which then, turn on lights. They employ pyro electric sensors that detect levels of infrared radiation and a lens to detect the sensing range.

The sensor has two slots made of IR sensitive materials that detect the same amount of IR when idle. When a warm body like a human or animal passes to interfere the first half, a positive differential change is caused between the two halves of the PIR sensor. On the contrary, a negative differential change is triggered when the second half is interfered, when warm bodies leave. These respective changes are detected to turn on or off lights. 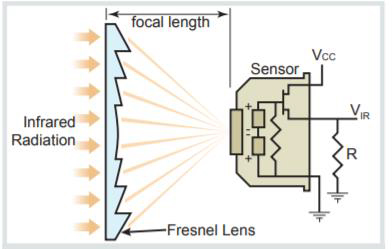 Vacancy sensors on the other hand only switches OFF light, provided, the space is detected to be vacant or no motion is detected. This means that the lights must be manually turned ON by the occupant while entering the space. Vacancy sensors save more energy, than occupancy sensing systems, as lights glow only when intentionally turned on, even when a motion is detected, and turns off immediately if vacant. It gives the occupant a choice of whether or not to turn on the lights based on need. This is crucial in saving energy. For example, if there is enough daylight entering the room, the occupant can choose not to turn on the lights at all unlike in occupancy sensing where lights turn on automatically regardless of how much ever daylight enters the room.

WiSilica’s new-age sensors namely WXD2CPLR and WXD2CPLC can help enterprises immensely reduce energy consumption and contribute towards green building initiatives. Further, the data generated through our occupancy sensors give insights into most utilized space. This information can be used to streamline energy usage, improve area specific services, and calculate the energy that can be saved. Over the years, we have helped many tier 1 companies from across the world achieve various energy rebates and titles and is evolving to meet scaling industry demands more efficiently.

To get helpful lighting control resources in your inbox, SIGN UP!

By hitting the submit button you authorize WiSilica to store and process your data in accordance with principles laid out in our privacy policy.